It is about YOU!

I just returned from London a couple of days ago. Many of my friends told us we were the smartest ones in America - leaving the night of the election and getting out of here!  I did not plan it that way intentionally, it happened that my daughter had a few days off from school so we booked the trip.  London was amazing, we loved everything about it and I am so happy we went.  But there was a little part of me that did wish I was back home with everything going on.

Our flight overseas did not have Wi-Fi, so my husband and I took turns waking up and refreshing the news feed that the plane did provide. We were just as shocked as so many people in the nation as the night unfolded.  Now for full disclosure, I am a registered Republican, however I never vote strictly by party line.  In this case, I did agree with much of what President Elect Trump said, however not all of it. And the things I did not agree with led me to personally not be able to vote for him. With all that said, however, he is going to be my President now, and I hope and pray that he will be one of the best we ever had.

I remember my father used to tell us how great this country was. He used to tell my sister and I that we had no idea how lucky we were. We lived in a country where freedom was sometimes taken for granted. Everyone had a right to vote and have their voices heard. Some chose not to exercise that right and many others made their feelings heard.  Things will not change overnight, and I can only hope that everyone recognizes this fact and gives President Elect Trump a chance. I know so many people that are so upset and have gone into a depression over this past week. To them I would say, you are entitled to your feelings just as others are entitled to theirs, however, do not loose sight of the bigger picture. You have the distinct honor of living in a country where anything is possible. It gave my father the ability to come here as a young man, with $5 in his pocket and not knowing a word of English, and through hard work and determination he made it and provided a better life for his children.

This is a country that has good people in it, don't for get that!  Since the election, two towns in NJ have already passed anti-BDS resolutions. They join Englewood, NJ and New York City which each passed their own anti-BDS resolutions a couple of months ago.  Last week, my town of Norwood passed the resolution unanimously, and then just last night, my hometown of Livingston did the same. In each town many people attended the meeting to show their town council their support, and many gave passionate speeches thanking the members for what they were doing. These brave people are standing up and saying we will not tolerate intolerance! We will not tolerate hate! We will not tolerate bigotry and anti-Semitism! At the end of the day, it is about what you do as a person, what you teach your children and how you live that matters. 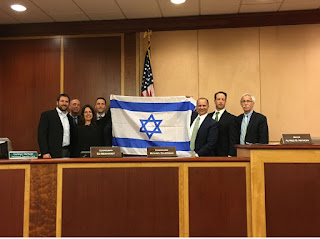 Email ThisBlogThis!Share to TwitterShare to FacebookShare to Pinterest
Labels: anti-Semitism, election, Livingston, neverforget, Norwood, together, together a journey for survival, together the book, Trump
Newer Posts Older Posts Home
Subscribe to: Posts (Atom)