As I look back on 2017, reflecting on the year, I am amazed at the people I have met and am excited to see what 2018 has in store. This past year, my father and I have had a chance to speak to people of all ages.


One of the most profound things I learned was the different perception children have in the world depending on where they are growing up. I always knew this theoretically of course, but being faced with it head on was a stark reminder of where we are in the world. This past year my father and I were speaking to 5th and 6th graders in Newark NJ. This was a group of hispanic and African American children. They had read the book as part of their class and were all so excited to meet my dad. When they first saw him their reaction was amazing - it was as if Beyoncé had walked in. The morning was wonderful, with so many great questions coming from the students. However, it was what I found out right before we entered the auditorium that really struck me. We were speaking to the teacher of the class and she told us about reactions the students had to reading the book. She told us that the biggest takeaway the students had reading the book was... that they did not realize that there was white on white violence. They just assumed if you were white you had it made. That hit me hard.


The thing is that to most people perception is reality. Having the opportunity to teach the young that we are all really the same could be life changing. We may all not be in the same place in our lives. Different social and economic standings of course influence attitude and opinion. But showing them that someone that is was once hunted, someone that experienced discrimination to the worst degree, that experienced a hatred like no other, can actually come though the other side and not only survive but thrive through hard work and perseverance is a lesson that needs to be taught.  We look forward to the year ahead and hopefully being able to make an impact on even more lives. 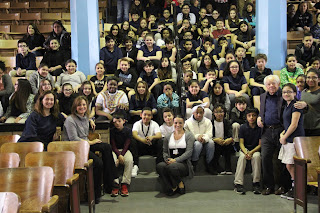