Thank you to The Simon Wiesenthal Center!

"An important work. Ann Arnold's effort to both tell their tale of her family's survival during the Holocaust while being a part of encouraging the next generation to embrace tolerance is inspiring."
-Michael Cohen, Eastern Director of the Simon Wiesenthal Center

Wow, is all I can say.  If you follow me on Facebook and have read my previous post, then you know how much I LOVE reading the reviews! It truly warms my heart and encourages me to continue to spread the message of Never Forget.

At the beginning of the summer, I had the pleasure to meet Michael Cohen, the Eastern Director of the Simon Wiesenthal Center.  For those that do not know who Simon Wiesenthal was, or what the center does, let me recap. Simon Wiesenthal was a survivor of the Nazi death camps who dedicated his life to hunting and bringing Nazi's to justice for their crimes and documenting the crimes of the Holocaust. The Simon Wiesenthal Center was founded in 1977 and is a "global human rights organization researching the Holocaust and hate in a historic and contemporary context. The Center confronts anti-Semitism, hate and terrorism, promotes human rights and dignity, stands with Israel, defends the safety of Jews worldwide, and teaches the lessons of the Holocaust for future generations. With a constituency of over 400,000 households in the United States, it is accredited as an NGO at international organizations including the United Nations, UNESCO, OSCE, Organization of American States (OAS), the Latin American Parliament (PARLATINO) and the Council of Europe. (http://www.wiesenthal.com)". As you can imagine, this was quite an important meeting for me!

Michael and I met at a Starbucks, and what I thought would be a quick coffee meeting, turned into such a wonderful two hour conversation. I learned so many great things that the Center is doing, was inspired by how it was started by Rabbi Hier and was motivated to keep speaking and spreading the word of Tolerance, Acceptance and Respect.  However, I was completely shocked, and never expected what came next.

On September 11th at Yankee Stadium, the Simon Wiesenthal Center is having an event where they are honoring 3 people with the first Annual Heroes of Tolerance Award, and yep - you got it, they asked me to be one of the honorees!! As my kids say - OMG!!! I was floored, shocked, and deeply honored. It was beyond my wildest dreams that an organization like this would actually recognize what I am doing and trying to accomplish.

I have to admit that over the last few weeks I have been reading more and more articles about the anti-Semitism that exist not only in this country, on college campuses and communities nearby, but also all around the world. I saw a video last week about college students in PA that had no idea what the Holocaust was, or even who Hitler was. How could that be?? I was in shock and it really threw me for a loop.  The other day I was quite down on everything. What am I doing? Will I actually be able to make a difference? Am I fighting a loosing battle? It was not a very good day.  I saw my dad the next day and shared my feeling with him. I asked him how he did it? Did he ever feel and live with the gripping fear that it will never end and that they will get us eventually? How did he go on each day with hope and a smile? His answer was quite simple - he was completely not shocked about the ignorance of these students - he actually said he would have been shocked if they knew anything. He told me how this is life, we will never change everyone nor should we expect to. We just have to keep spreading the message, keep doing what we are doing and keep putting one foot in front of the other and move forward.  My husband said it best - he told me to concentrate on affecting one person at a time.

So that is what I am going to do. I worked with a teacher over the summer and we wrote up a lesson plan to accompany the book for grades 8/9. The goal being that we know that the way we can affect change is by starting at the beginning, with our Youth.

I want to thank Michael Cohen, Rabbi Hier and Rabbi May (whom I had the pleasure of meeting a few weeks ago) and the Simon Wiesenthal Center for bestowing this honor on me. I hope I can live up to the award and continue to spread the message of hope and get people to truly understand that by being a good person and by respecting one another we can overcome the hate, bigotry and anti-Semitism that exist.

This sums it up - we will keep doing what we are doing, and I hope he keeps smiling! 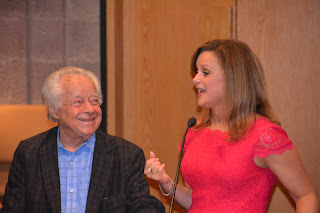